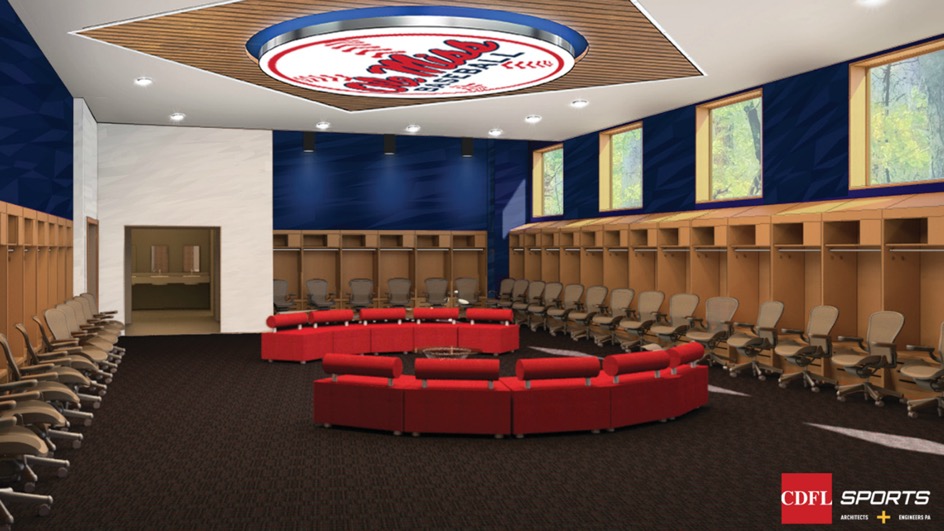 OXFORD, Miss. – In February 2016, Ole Miss Athletics announced plans for a $13 million baseball project that will enhance the student-athlete experience as well as the gameday atmosphere for Rebel fans. There will be multiple phases to the renovations with the goal for entire project be completed by the start of the 2018 season. The project will include the construction of a team performance center, dugout club and rooftop plaza on the first base side of the stadium.

Cooke Douglass Farr Lemons Architects (CDFL Sports) has been chosen as the architect for the project. This will not be CDFL’s first project on campus as the architectural group has already worked on the expansion of Vaught-Hemingway Stadium, the lighting of the football practice field as well as the design of the Olivia and Arching Manning Athletics Performance Center.

“Once again, we are happy to partner with CDFL Sports to complete another expansion and renovation project within our athletics complex,” said Ole Miss Athletics Director Ross Bjork. “CDFL has done tremendous work at Ole Miss and has helped make our athletic facilities among the best in the country. We are excited with the plans they have in place for the new baseball performance center and upgrades to Oxford-University Stadium/Swayze Field.”

Ole Miss continues to upgrade facilities in order to fulfill the needs of its student-athletes. Members of the Ole Miss baseball team will see this first hand with the construction of a new performance center at O-U Stadium. Behind a generous lead gift by Ed and Jan Trehern, the baseball performance center will feature a new clubhouse, training room, weight room and players’ lounge. The O-U Stadium addition will be built on the first base side of the facility, meaning the Rebels will switch dugouts after the completion of the project.

“The Trehern family and its foundation are very excited to be a part of this new era of facilities for Ole Miss Baseball,” said Ed Trehern. “Ole Miss has become a national pacesetter for facilities and crowds in baseball. The baseball facilities are very good now, but it is time to go to the next level because the competition is not sitting quietly. Baseball has become one of the trademarks for Ole Miss Athletics. We hope our gift will encourage others to support and give what you can to keep Ole Miss at the top.”

Already having the best atmosphere in college baseball, O-U Stadium will see the gameday experience reach new heights for Ole Miss fans. Similar to the field club going in Vaught-Hemingway Stadium and the courtside club in The Pavilion at Ole Miss, a dugout club will be a new feature to O-U Stadium. The exclusive club will have 330 seats and give fans a look at the Rebels as they leave the clubhouse and head to the field. As part of the dugout club, four rows of box seats will be added behind home plate, thus improving the best seats in the stadium and allowing fans closer access to the action.

As part of the $1.5 million donation by the M-Club towards the Forward Together campaign, a rooftop plaza will be built above the performance center. The plaza will be exclusive to baseball letterwinners, M-Club members and season ticket holders with seats in the newly created area.

Other parts of the project include the extension of the box seats down the third base line, the relocation of the children’s playground with improvements to it as well as the left field terrace. The additional seating throughout the stadium will increase stadium capacity from 10,323 to 10,715.

Fundraising has already begun for the upgrades and renovations. Along with the lead gift by Trehern’s and the commitment from the M-Club, head coach Mike Bianco has already financially contributed to the project.

“On behalf of the Ole Miss Baseball program, we are extremely grateful for the generous contributions by the Trehern family and the M-Club towards the renovations to O-U Stadium and the addition of our own team performance center,” said Bianco. “With the valuable gift from Ed and Jan Trehern, the opportunity to build the best college baseball performance facility in the country has now become a reality.”

“Some great people/players have been involved with Ole Miss Baseball such as our great friend Don Kessinger. Coach Bianco has done and continues to do a great job, and many coaches use Ole Miss as the model program,” added Trehern. “One of our daughters was a Diamond Girl, and we have been very close to the program for a number of years. We are blessed to be able to make another investment in the program and facilities here at Ole Miss. We know we are recruiting the best players in the country and to win these battles we cannot come up short as it relates to facilities.”