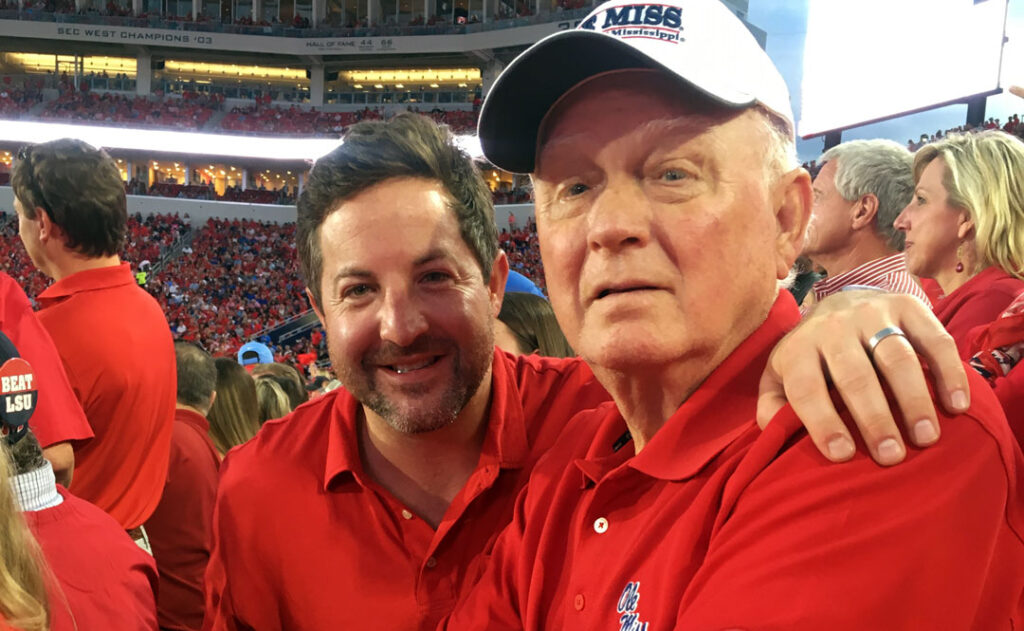 Former Rebel basketball player Ray Waddell of Dallas, Texas, has made a gift to the University of Mississippi that honors his late father by naming a mezzanine in The Pavilion at Ole Miss, the teams’ state-of-the-art arena. Rayburn Waddell of Madison, Mississippi, passed away in August 2020. “I enjoy giving back to the community and chose to support the Vaught Society in honor of my father because he was a big Rebel fan,” said Waddell, a native of Philadelphia, Mississippi, who grew up attending Ole Miss games with his dad.

In college, watching basketball from the stands was too far away from the action, so Waddell was asked to walk on, joining the team under then-Head Coach Rod Barnes in 2000. “The tough training and practices helped build character, and I formed some lifelong friendships,” said Waddell, founder and CEO of CEC Companies, a specialty contracting and engineering company in the mechanical, electrical, plumbing and technology space.

Keith Carter, athletic director and vice chancellor for Intercollegiate Athletics, expressed his gratitude for Waddell’s gift. “It’s so encouraging to see one of our former players give back to our program, and I greatly admire Ray for wanting his gift to be unrestricted, meaning it can be used to support any of our initiatives that are designed to help our student-athletes succeed in college and beyond,” Carter said.

Waddell himself is an example of a player who found a measure of success. After graduating in 2001 with a bachelor’s degree from the College of Liberal Arts, he worked for Cellular South and T-Mobile before joining W.G Yates & Sons Construction, where he built a rewarding career as director of business development. Then, with a passion to run his own company, he started CEC Electrical Inc. in 2009. In a few short years, CEC became one of the largest subcontractors in the country with over 800 employees and $200 million in annual revenues. “Success is a subjective term. It means a lot of different things to certain people,” Waddell said. “For me, it’s having a sustainable business that lives by its core values and provides a great working environment for our employees,” said Waddell, adding that he also credits his success to perseverance and a supportive family.

He met his wife, Angelique, on the Oxford campus in 1999. She graduated with a bachelor’s degree in business administration from UM in 2003 and a law degree from Tulane Law School in 2006; the couple was married in 2008. They have three children: Charlie, 9; Madeleine, 7; and Mary Lehmann, 3. Waddell, who now plays golf more than basketball, has a favorite memory from his Rebel days—the time he hit a three-point shot at the buzzer in Rupp Arena (the University of Kentucky’s famed basketball arena).

Another fond memory came only a few years ago. “I had my wife, kids, Mom, Dad and my in-laws in the Grove for a football game day and I was able to take them all over to the Gibbs Letterwinner Walk and show them my name on the M-Club wall,” he remembered. “That was really a cool thing to be able to do with my family and especially with my dad.”

Waddell is a board member of the ACE Mentor Program and president and board member of The Heartland Group Captive Insurance Group; he was named Most Admired CEO in 2018 by the Dallas Business Journal.

The late Rayburn Waddell was a native and longtime resident of Neshoba County, Mississippi. He graduated from Philadelphia High School and East Central Junior College, where he played and excelled in basketball. He then played at East Central Junior College under the late Denver Brackeen. While an Ole Miss Rebel in 1955, Brackeen topped the SEC in scoring, earning second team All-America and unanimous All-SEC honors. Ray Waddell said one of his father’s favorite teammates was Van Chancellor, former UM Head Women’s Basketball coach. “Dad told me he would always pass the ball to Van because he knew Van would pass it back for him to shoot a basket,” Waddell said.

Ray Waddell said he’s looking forward to returning to campus one day to watch basketball from the mezzanine named for his dad. 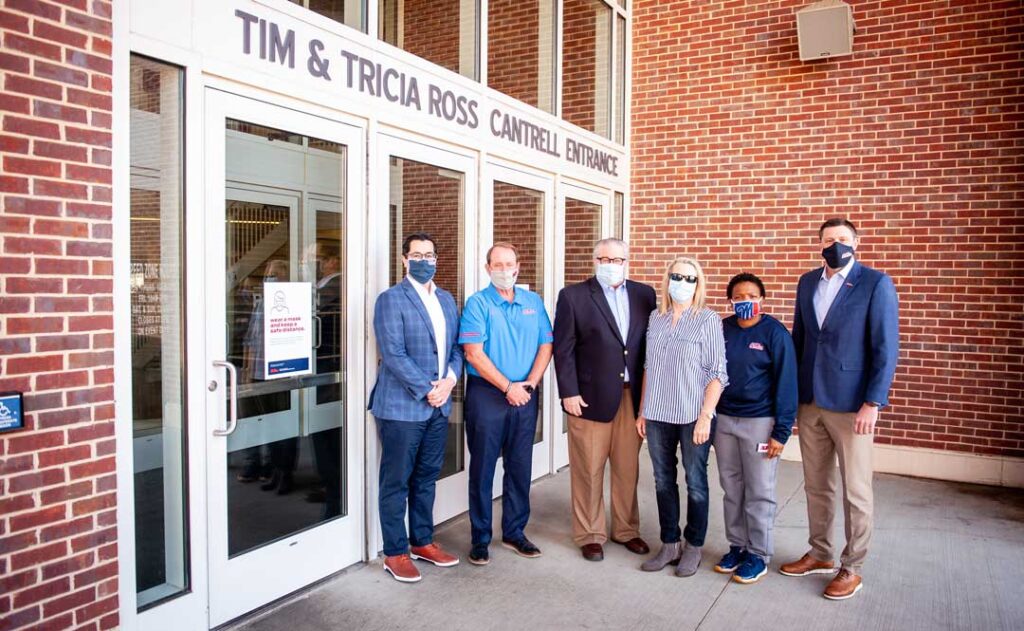 To say Tricia Cantrell is passionate about Ole Miss Basketball is an understatement at best. The Memphis, Tennessee, native and now Oxford, Mississippi, resident grew up a Rebel fan inspired by her father, Ralph Ross, who played center for Ole Miss in the Old Gym (now Martindale-Cole Student Services Center). Visit her home and she’s quick to show off slats she collected from the gymnasium’s floor when the Rebels moved their venue to C.M. “Tad” Smith Coliseum, affectionately known as the Tad Pad.

Cantrell, a 1977 UM School of Education graduate, rarely missed a home game in either of those venues and now she’s a fixture in courtside seats at the Rebels’ new home court: the vibrant, state-of-the-art Pavilion at the University of Mississippi. Having her name attached to the Pavilion seems a fitting way to “recognize what Ole Miss Basketball has meant to her life,” said husband Tim Cantrell, a 1979 graduate of the UM School of Business Administration with a degree in accounting and recently retired CFO of Tenax Aerospace. The couple’s $500,000 gift to the university has named the venue’s northwest entrance.

“We are so grateful to Tim and Tricia for their generous gift to Ole Miss Athletics. Their investment into our program will directly benefit our student-athletes who are always our first priority,” said Keith Carter, athletic director and vice chancellor for Intercollegiate Athletics. “I got to know the Cantrells when I played basketball for Ole Miss, and we have since become friends. They are some of our most ardent fans, especially Tricia who has really invested so much of herself into our players’ lives through the years.”

After they graduate, some never look back. Others, however, seek Cantrell’s advice. She offers them encouragement and affirmation, even admonishment when needed. She talks to them about life skills: the importance of getting a good education, saving money, staying out of debt, putting off self-gratification — the stuff of adulting they didn’t learn in a classroom or on the basketball court. “I just want those kids to feel loved and acknowledged,” she said. “I want them in church.  I want them in class. Some listen better than others.”

Almost as much as the friendship she offers, the players appreciate the photos she takes. She tries to get at least one good shot of each athlete in action. One player who had enjoyed only minimal court time especially admired the picture she took. “He got in at the end of the exhibition game that season, and I zoomed in on him and captured that moment,” Cantrell said. “And he was just flabbergasted because he had never played in a real game at that point.”

Ole Miss Basketball has given Cantrell many memories to treasure. Like the time she and her dad sat behind a young Archie Manning at an Ole Miss-LSU game watching Pete Maravich. Or topping the hill on Hwy. 6 into Oxford that revealed her first-ever glance of the Tad Pad roof when it was under construction. Or flying with the team to away games and tournaments. Or seeing Johnny Neuman and Shaquille O’Neal shoot hoops as student-athletes. Or taking pictures of players with Academy Award-winning actor Morgan Freeman, who is a fan and sometimes sits next to her in the Pavilion. “It’s funny watching other teams who don’t know he’s going to be there,” she said. “A lot of times, the ball will come out of bounds right at us and the ref or opposing player will come off the court. They’ll see Morgan and then kind of lose their concentration momentarily.”

In addition to these memories, Cantrell credits Ole Miss for giving her much more. “First of all, if it weren’t for Ole Miss, I wouldn’t be alive because if my dad had not come here, he would’ve never met my mother. Also, I would not have met Tim.” Married now 43 years, the couple has two adult sons, Brett and Jordan, both UM graduates, and five grandchildren who will be ages 1, 2, 3, 4 and 5 in March.

Cantrell said she hopes their gift will help sustain the Ole Miss men’s and women’s basketball programs during tenuous economic times. “Tim and I are blessed to be able to make this gift; it was actually more than we thought we were going to give,” she said. “But it’s what we decided to do because we worry about the school right now, not just athletics but also academics. We are wise enough to realize all the financial implications of what this pandemic is doing to all schools. Very few of them are exempt from the impact.”

OXFORD, Miss. – In accordance with the State of Mississippi’s most recent executive orders, The Pavilion at Ole Miss will be at 25 percent capacity for Rebel men’s and women’s basketball games to begin the upcoming 2020-21 season.

Ole Miss’ hoops attendance plan, which is based on guidelines from the state and the Southeastern Conference in response to COVID-19, can be found in its entirety at olemissgameday.com/basketball. Notably, face coverings are required for entry and at all times while inside the arena, except when actively eating and drinking.

“Our staff has taken the experiences from football season and utilized that knowledge to develop a safe and compliant plan for basketball,” said Keith Carter, Ole Miss Vice Chancellor for Intercollegiate Athletics. “We are blessed with one of the best facilities in college hoops, and those modern amenities have allowed us to meet the necessary COVID requirements without making major structural changes.

“I want to thank the Ole Miss family for its patience and cooperation during football season, and we ask for that same understanding as we work hard to offer a safe and entertaining environment in The Pavilion.”

To meet SEC protocol, the lower seating area, including the student bleachers, courtside seats and lower rows of the Pavilion Club have been removed. Team benches have moved from the east sideline to the west.

For both men’s and women’s games, 2020-21 season tickets will be sold. Floor seats are not available due to social distancing guidelines.

Beginning November 16, men’s season ticket holders will be able to select their section, and Ole Miss Athletics will socially distance fans within each section. Exact row and seat numbers will be assigned to each fan, allowing for six feet (three seats) between each order of tickets. There will be a maximum of six tickets per account, and tickets and parking will be sent via digital delivery 48 hours prior to each game.

Parking is open for women’s games, while the Pavilion Garage, Lot A and Lot 4 will be reserved for men’s games and available for season ticket holders to purchase a pass. All other lots will be open on a first come, first served basis.

Student admission is free for women’s games, while men’s tickets will go on sale 48 hours prior to each home game online through students.olemisstix.com. All tickets will be sent via mobile delivery at the time of purchase.