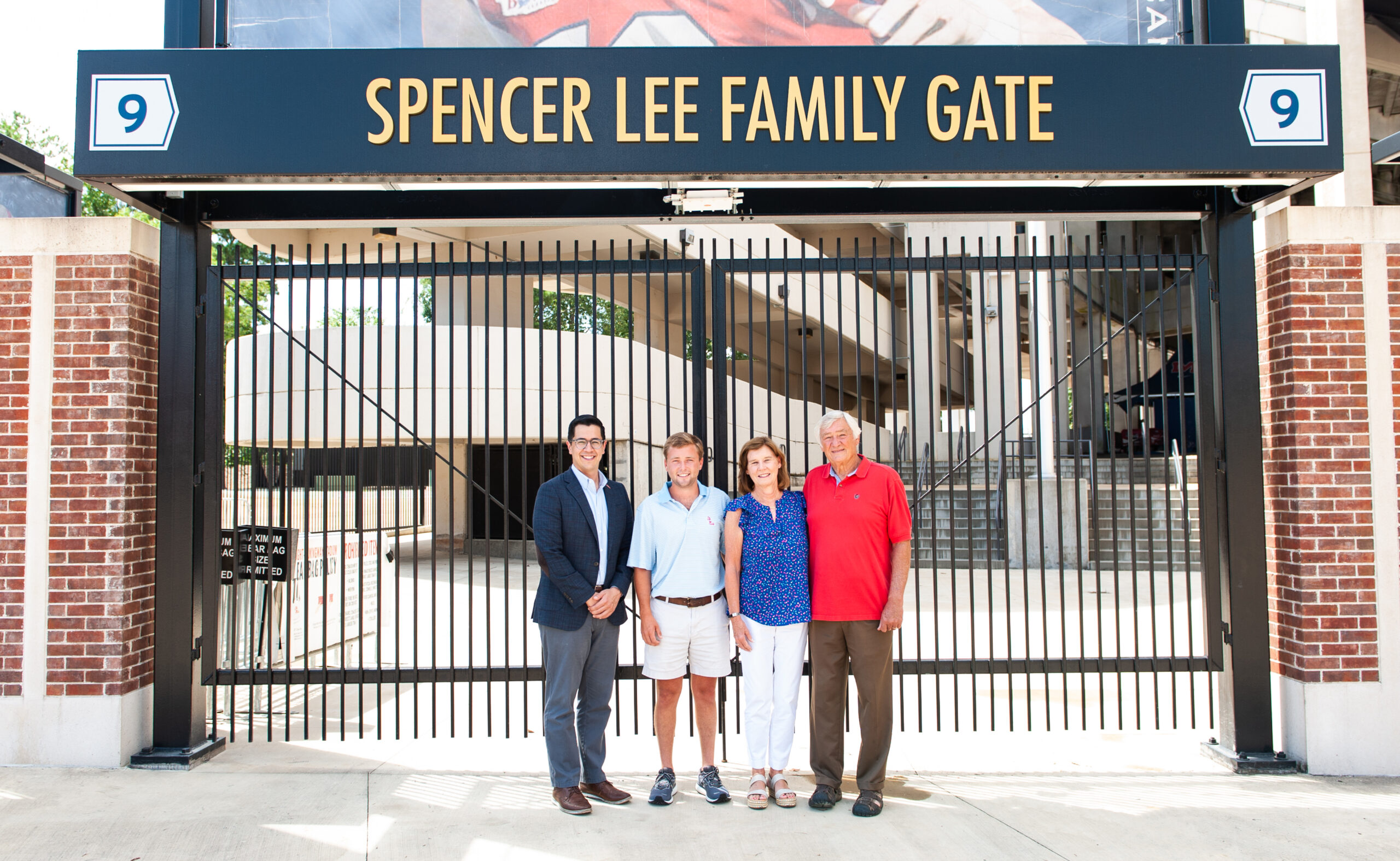 Dr. Spencer Lee and his extended family have come and gone from the University of Mississippi over four generations, but the Lee name will soon be a permanent fixture on the Oxford campus. Lee, a retired dentist from Pickwick Lake, Tennessee, and his wife, Rebecca, recently made a $250,000 gift to the Forward Together campaign for Ole Miss Athletics, which bolsters facilities and programs for student-athletes. In recognition, the Lee name will be added to the Gate 9 entrance of Vaught-Hemingway Stadium.

“All our parents were graduates of Ole Miss; thus we have always been Rebel fans and have enjoyed many fall days in the Grove with family and friends before and after ballgames,” said Lee, who attended UM’s pre-dental program until 1965; he completed his degree in 1969 at the University of Tennessee. “We’ve also had four children graduate from Ole Miss along with several of their spouses,” he continued, adding their grandson — also named Spencer Lee — is a senior in the UM School of Engineering. “Needless to say, we all enjoy Ole Miss athletics and our gift represents our support for Rebel sports.”

Vice Chancellor for Intercollegiate Athletics Keith Carter expressed gratitude to the Lee family whose name is as much a part of the University of Mississippi as the gate on which it will reside. “Gifts like these are inspiring to others who may be considering whether the timing is right to give back to Ole Miss. Other potential donors will see Dr. Lee leading the way toward increased support and hopefully feel that they want to contribute too,” Carter said. “We are extremely grateful for the Lees’ support and their desire to see our student-athletes succeed in their particular sports, in the classroom and in life beyond college.”

Rebecca Ramer Lee earned a bachelor’s degree in education and a master’s degree in library science from Ole Miss in 1972 and 1975 respectively. She retired after 40 years as a librarian and teacher with the Corinth School System.

When they’re not watching Rebels play, the Lees enjoy traveling and spending time on their boat at Pickwick Lake.

The Lees’ gift is part of the Ole Miss Athletics Foundation’s drive to honor donors with naming opportunities for each entrance gate at Vaught-Hemingway Stadium. “The gate naming initiative will play an integral role in completing the $200 million Forward Together campaign,” said Fowler Staines, chief executive officer of the Ole Miss Athletics Foundation. “With $185 million raised toward a multitude of capital projects, the final phase of the campaign saw the opening of the William F. Galtney Indoor Tennis Center and completed renovations to the Tosh Family Short Course and Oxford-University Stadium.”

Naming opportunities remain available in Vaught-Hemingway Stadium for the grand gates at the north, east and west entrances as well as a limited number of individual gates.

For more information about the Forward Together campaign or the gate naming initiative, visit http://givetoathletics.com or contact Fowler Staines, chief executive officer of the Ole Miss Athletics Foundation, at 662-915-1143 or fowler@olemiss.edu.