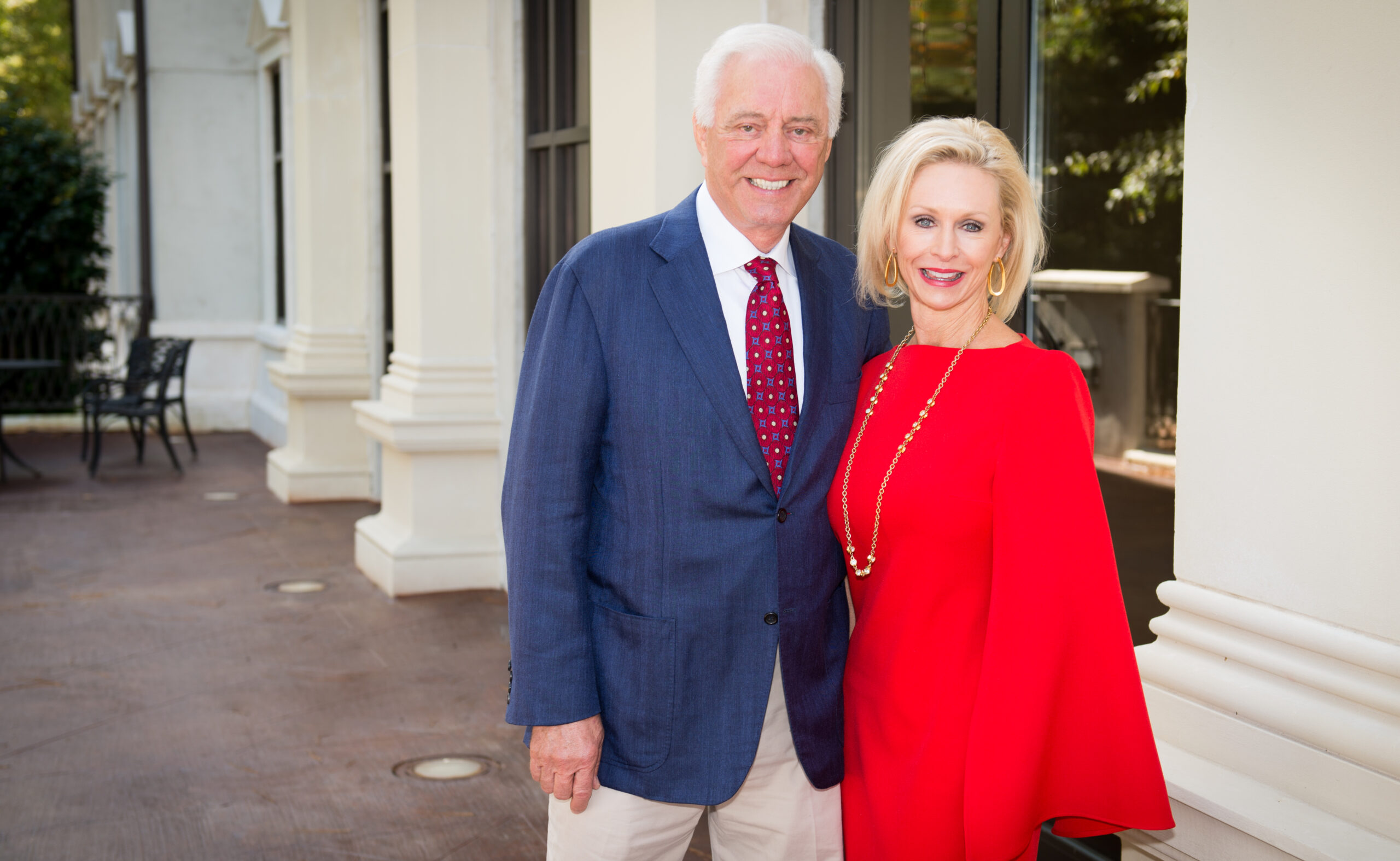 Fans entering the south entrance of Vaught-Hemingway Stadium at the University of Mississippi may have noticed new signage, displaying the names of Diane and J.L. Holloway and serving as a lasting tribute to the Ridgeland, Mississippi, couple’s recent major gift in support of Ole Miss Athletics.

The Holloways’ $1 million gift to the university’s Forward Together campaign will help strengthen programs and fund facilities and equipment. “This gracious gift will ultimately make significant improvements for the benefit of our student- athletes,” said Ross Bjork, vice chancellor for intercollegiate athletics. “The Holloways have a real desire to see not just our program achieve success but also our individual student-athletes, both on and off the field. We are extremely grateful for their generosity.”

The Holloway gift kicks off the Ole Miss Athletics Foundation’s drive to honor donors with naming opportunities for each of the entrance gates at Vaught-Hemingway Stadium and the Pavilion at Ole Miss, the Rebels’ basketball arena. “The Gate Naming Initiative is the first of its kind and will play an integral role in completing the $200 million Forward Together campaign,” said Keith Carter, senior associate athletics director for development and executive director of the Ole Miss Athletics Foundation. “With $173 million raised toward a multitude of capital projects, the final phase of the campaign will see the opening of an indoor tennis facility this December and completed renovations at Oxford-University Stadium (baseball program) in early spring.”

Gate naming opportunities start at $250,000 and are payable over five years.

J.L. Holloway is founder and CEO of Tenax Aerospace in Madison, Mississippi, a company that leases aircraft to the U.S. government, including one used by FBI Director Christopher Wray for executive travel and other aircraft used by the Department of Defense for geographic mapping. While much of Holloway’s work is classified and cannot be discussed, he’s always eager to talk about Ole Miss. “Our teams are not doing exactly what we would like for them to do these days. There’ve been a few problems along the way, so we just thought this was an opportune time to be a giver in maybe an inopportune situation. We want our teams to know we are supporting them,” he said, adding that he hopes his gift will encourage similar contributions as a show of camaraderie. “You know most of us don’t need much support when everything is going perfect for us; we need that support when we feel like we’re not at the top of our game.”

The Holloways’ gift to name a gate is the most recent in a two-decade history of giving to the university, totaling nearly $2 million. “J.L. has the biggest heart of anybody I’ve ever known. And not just in giving financially but giving of his thought, giving of his time and truly caring about what’s happening in people’s lives from very, very young people to old people,” said Diane Holloway, who earned a degree in education from Ole Miss in 1985 and is the daughter of Jackie Triplett and the late Dr. R. Faser Triplett of Jackson, Mississippi, longtime dedicated supporters of Ole Miss. “He does have a passion for helping young people.

“In the business sense, I think God has given J.L. an unusual gift for seeing things differently, building great teams and building businesses, and J.L. has been faithful to follow that,” Diane Holloway continued. “I feel that God has given us tremendous success because he knows that J.L. is a faithful giver and has believed forever that to whom much is given, much is expected. He lives that life and I admire that a lot.”

As a young man, Holloway served a six-month stint in the U.S. Army before taking his first job: selling sewing machines and vacuum cleaners. At 24, he started a small construction rental business that he built into a multistate organization and ultimately sold about six years later. Then, employing six people, he began HAM Marine, which became the foundation of Friede Goldman International with Holloway serving as its CEO. The company, a leading international provider of offshore drilling services, was publicly traded on the New York Stock Exchange and had 8,000 employees and operations in eight countries when Holloway retired to be able to play more tennis. “That lasted about three weeks and Diane told me to go find something to do!” Holloway said, laughing!

To what does he credit his success?

“No, it’s his tenacious, hard work,” she counters.

“I’ve been extremely blessed in my life,” he admits. “I’ve literally been an entrepreneur and CEO since I was 24 years old, so I enjoy the business world. I enjoy building things and working with people. I won’t say that comes natural; it comes from a lot of hard work in pursuing goals and making sure you have a method to accomplish them.

“In America, most of us describe success as how well we’ve done financially in life and certainly that’s a metric that we use, but to me it’s a lot about how you’ve been toward your fellow man and how you’ve been toward those organizations that do so much for people,” he said. “To me, that’s been a success point for Diane and me both. We’re both givers and we’re both people who want to help other people. So it brings a real joy and satisfaction to us to be able to provide things for others through the resources with which we’ve been blessed.”

Chancellor Jeffrey Vitter expressed his appreciation for the university’s loyal donors. “We are tremendously grateful to the Holloways for this wonderful gift as well as their longtime commitment to generously supporting Ole Miss,” he said. “I continue to be inspired by how dedicated and supportive our alumni and friends are to UM — they are a significant reason for our sustained growth and success. Our university is truly fortunate to have individuals such as J.L. and Diane, who are so strongly committed and passionate about helping others.”