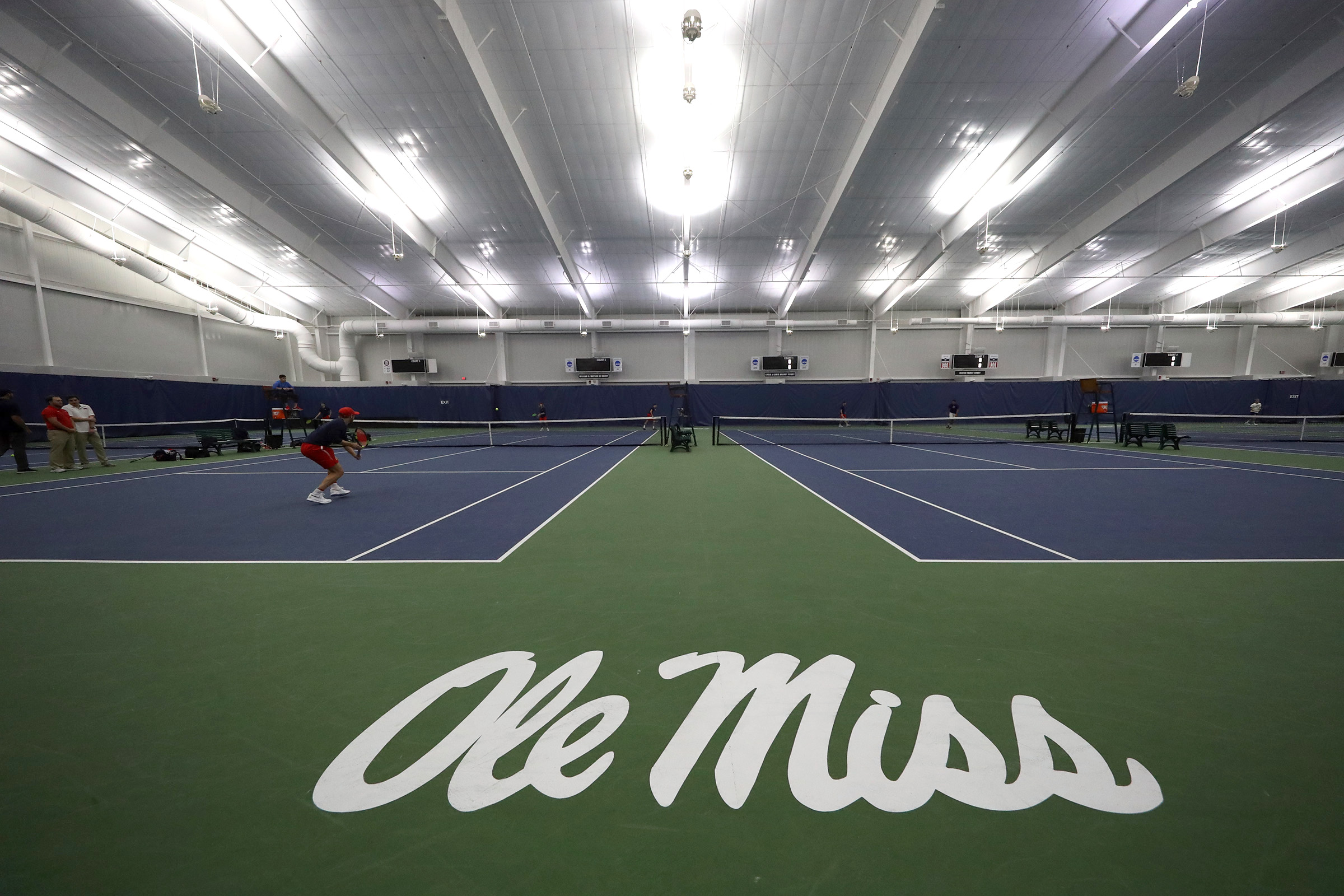 Fans of Ole Miss Tennis can leave their winter coats at home come January as the Rebels begin competing in a new $11 million indoor facility, which has received a major boost from longtime tennis enthusiasts.

A $300,000 gift from Louis and Lucia Brandt of Houston, Texas, helped jump-start construction on the 52,000-square-foot, two-story building. Located southeast of the Olivia and Archie Manning Athletic Performance Center on Manning Way, the facility will feature six indoor tennis courts for practice and competition, grandstand bleacher seating for 300 spectators, fan amenities and a spacious lobby.

Former Ole Miss tennis team member and mathematics alumnus Louis Brandt — an Oxford native who practically grew up on campus with his dad, an economics professor — has enjoyed playing tennis for more than seven decades. His previous support of the tennis programs include resources for the Gillom Center, which had indoor courts before the renovation, and the varsity tennis pavilion on Magnolia Drive.

“Athletics has always been part of my life,” Brandt said. “Through college athletics, people are brought back to campus and are able to stay connected. That’s extremely important to a university. The location of the new center is perfect, and the project will be an outstanding addition among Southeastern Conference facilities.

“I love the sport of tennis because it is one you can play all of your life.  It is both physically and mentally challenging, tennis equipment is inexpensive, and there are a lot of courts available, especially in Oxford. In fact, since 2014, there is even a new club in town. I partnered with two others to create The Goose Creek Club, a family-oriented tennis, fitness and swim club offering the only clay courts between Memphis and Jackson.“

Keith Carter, senior associate athletics director for development and executive director of the Ole Miss Athletics Foundation, spoke of Brandt’s “significant, far-reaching impact” on building Ole Miss tennis programs to the level they enjoy today. “The remarkable achievements for which our tennis programs are now known have been possible because of the generosity of the Brandts and a few other dedicated alumni who understand the investments needed to succeed in our highly-competitive conference,” he said. “This new gift from the Brandts demonstrates a deep commitment to seeing Ole Miss tennis programs thrive in the SEC and on the national stage. We are extremely grateful for their support.”

Tennis has come a long way since Brandt began playing at 12 years of age, with wooden rackets. “There was no tennis instruction in Oxford so my friends and I learned by watching the Ole Miss team members who primarily came from towns where they had the luxury of tennis instruction during high school. “When I was around 14, I taught myself to string rackets. I purchased equipment from the Sears Roebuck catalog and, after destroying several rackets, became brave enough to put up a sign at the university advertising my services. People responded, and I began to string rackets for college students and eventually for some members of the tennis team.”

Brandt’s love of tennis and his love of Ole Miss combined to inspire his and Lucia’s support of the men’s and women’s programs, both financially and as enthusiastic fans. Brandt says he is “very proud” of the tennis programs, giving former longtime head coach Billy Chadwick the credit for setting a high bar for team success. “His successors are maintaining that level of accomplishment.”

Women’s tennis head coach Mark Beyers expressed his appreciation for the couple’s generosity. “It is great to see the Brandts at more home matches now that they are spending additional time in Oxford. Louis has been so wonderful to Ole Miss and specifically to Ole Miss tennis. His support has given our student-athletes an opportunity to practice and compete in some of the best facilities in the country,” Beyers said.

Men’s head coach Toby Hansson agreed, saying, “Louis Brandt is a lifelong supporter of our Ole Miss tennis programs. His commitment has enabled the Rebels to boast one of the nation’s premier indoor tennis facilities. His and Lucia’s dedication to our new facility will help ensure that our student-athletes can continue to successfully train and compete at the highest level.

“We are humbled by his contributions, and both the men’s and women’s programs will feel the impact of his generosity for years to come.”

During his college years, Brandt played varsity tennis along with Phil Berry, Bill Watson, Buddy Williamson and Morris Denton. Brandt’s Ole Miss doubles partner, Denton, is back as an Oxford resident now that he has retired, enabling the two to continue playing tennis together. Brandt began making gifts to the tennis programs in 1989, and later in 2001, began a 10-year program of providing added compensation for tennis coaches, helping bring their salaries in line with others in the SEC.

The Brandts’ philanthropic gifts permeate every area of Louis’ alma mater; a University of Texas (UT) alumna, Lucia has also become a faithful Ole Miss supporter. While serving as the chair of the University Foundation, Louis played a pivotal role in the foundation’s current facilities when he provided the funds in 1992 to purchase the Memory House from the John Falkner family. After the home underwent extensive renovations, it was renamed Brandt Memory House in his honor in 1995. The facilities are utilized daily for foundation business, university meetings, donor events and university-wide activities.

Louis Brandt’s business career has been centered in Texas, where he founded and later sold The Brandt Company, which is now a division of a New York Stock Exchange company. He also holds an engineering degree from UT.

For more information about the Forward Together campaign for Ole Miss Athletics, contact Keith Carter at jkcarter@olemiss.edu, call 662-915-7159 or visit https://givetoathletics.com/forward-together/.