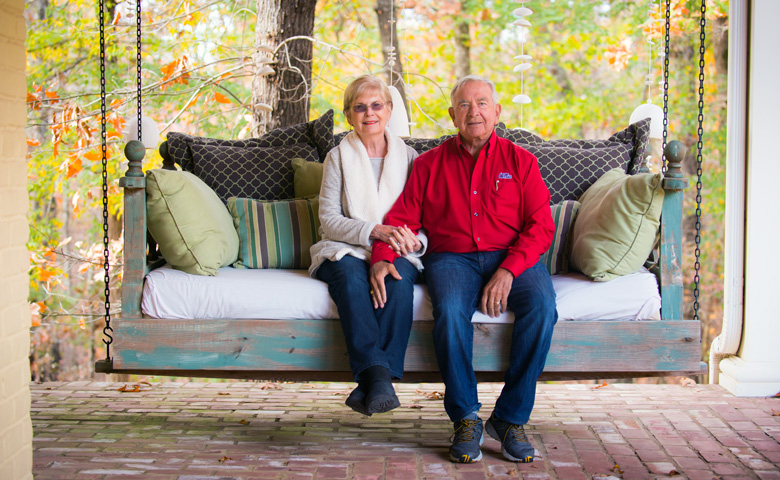 Don and Lynne Davis met in anatomy and physiology lab and realized instantly they had great chemistry. Now married for 53 years, the Davises of Meridian, Mississippi, admit they fell in love at first sight. They are grateful to the University of Mississippi for bringing them together and also for making them who they are today: Don, a highly successful otolaryngologist who recently retired after a 43-year practice, and Lynne, a retired pharmacist.

“We both love Ole Miss,” Don Davis said. “We spend a lot of time in Oxford. I credit Ole Miss with my education which allowed me to make enough money and make the wise investment choices needed to be able to give back to the university in a significant way.” With a $1 million gift, the Davises have established two endowments: The Donald S. and Lynne R. Davis Endowment for Athletics will provide support for the Ole Miss Athletics Foundation (OMAF) and the Donald S. and Lynne R. Davis Academic Scholarship Endowment will offer financial assistance to undergraduate students from Meridian. “During this season of giving, we are deeply grateful to the Davises for their incredible generosity,” said Keith Carter, senior associate athletics director for development and executive director of the OMAF. “I am personally impressed by their all-encompassing loyalty to the university as is evident in their giving record, which supports not only athletics but also academics.”

A member of the Ole Miss Air Force ROTC, Don Davis graduated with a bachelor’s degree in biology in 1958 and then entered flight school for three years before returning to Ole Miss to take classes that would prepare him for medical school. At that time, he met Lynne Ruble of West Point, Mississippi, who graduated from Ole Miss in 1963 with a Bachelor of Science degree in pharmacy.

After Don Davis earned his medical degree in 1966 from the University of Mississippi Medical School in Jackson, he and Lynne moved to Meridian to start a practice and a family. The couple has three grown children — Alicia Davis Johnson of New Orleans, Louisiana, Don Davis Jr. of Oxford, Mississippi, and Andy Davis of Meridian, all Ole Miss alumni — and seven grandchildren. “I told them they could go anywhere they wanted to go, but the money is going to Ole Miss,” Davis said, laughing. At Ole Miss, Dr. Davis was active in his fraternity, Sigma Chi, while Lynne Davis was likewise involved with her sorority, Delta Delta Delta. Now, when they’re not enjoying Ole Miss sports or spending time with their grandchildren, they love to travel, having recently completed a trip around the world. Next up is a trip to Rwanda, Africa, to observe mountain gorillas in the wild — an adventure that has been on Lynne Davis’s bucket list for many years.