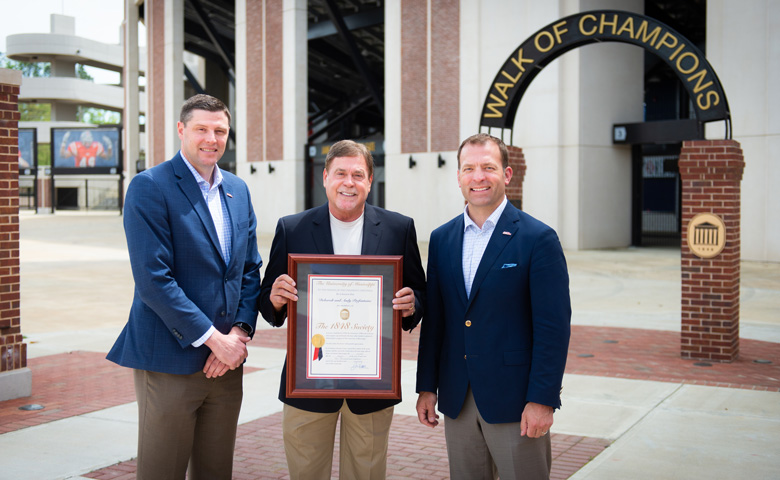 By Bill Dabney
Andy Prefontaine built bridges in the summertime to pay his way through college.

“At that time, the interstate was being built in Connecticut, and my oldest brother was a foreman,” recalls Prefontaine of Indianapolis, Indiana. “I worked as a rod buster, reinforcing concrete with steel. It was a great paying job but it was very, very difficult.”

In addition to that summer job, Prefontaine took out a student loan, which his sister paid off as a gift. He knows there’s value in hard work but admits a scholarship would have helped offset expenses, allowing him to more readily focus on school.

Now, as CEO of Family Leisure — a multistate retailer of swimming pools, outdoor furnishings and recreation equipment — Prefontaine wants to pay his blessings forward by including the University of Mississippi in his estate plans. His unrestricted gift, with an estimated value of $423,000, establishes the Andy and Deborah Prefontaine Scholarship Endowment.

“I know financial assistance is important these days with rising tuition costs,” said Prefontaine, who recently made a similar gift to his alma mater, Morehead State University in Morehead, Kentucky. “Students need scholarship money. Sometimes just a few thousand dollars is the deciding factor on whether a student can attend college or not.

“I came from a very humble background: first-generation American parents who were textile workers,” he continued. “I grew up with very little. So I know life can be trying, challenging. I know what that’s like. I’ve just been very fortunate and God blessed my work, so I feel like I have an obligation to pay it forward.”

“It’s encouraging to see alumni and friends of the university who understand the importance of higher education and have a desire to help our students achieve their goals,” Sparks said. “We are extremely grateful to Andy and Debbie for their generosity and forethought in making a gift that will help students for generations to come.”

An avid follower of collegiate sports, Prefontaine became a Rebel fan when his son, Kevin, attended Ole Miss in the mid-1990s; he graduated in 1998 with a bachelor’s degree in business administration.

“I just fell in love with the SEC and Ole Miss in particular, its hospitality and everything that goes on. Over the years, people assumed I went to Ole Miss and I got tired of telling them I didn’t, so I enrolled,” said Prefontaine, who took a Russian history class.

“I’m a history buff, but I had that piece as an open blank that I needed to fill in. And I loved it; it was great. Now I can truthfully say I went to Ole Miss!”

As a student at Morehead State, he was a member of the ROTC program’s first commissioned graduating class and served as the last president of the Aquila Club before the social organization became the national fraternity Pi Kappa Alpha. After graduating, he was commissioned as a second lieutenant in the U.S. Army and served six years as a reserve engineer officer.

Along the way, he met Debbie at a country music venue in Cincinnati, Ohio, her hometown and the city that launched his retail career. The couple has three children and eight grandchildren.

Prefontaine’s estate gift awards him membership in the 1848 Society, named for the year the university opened the Lyceum doors to its first students. The society recognizes generous alumni and friends who thoughtfully provide for the university through planned and deferred gifts.

“I hope the gift enhances many students’ lives and that it will make a difference,” Prefontaine said. “Perhaps these students can pay it forward, realizing it was the break they needed to be able to go to school.”

For information on including Ole Miss in your estate, contact Byron Liles, senior director of gift planning, at 662-915-7601 or byron@olemiss.edu.

For information on giving to the Ole Miss Athletics Foundation, contact Keith Carter, Deputy A.D. for Development and Resource Acquisition, at 662-915-1929 or jkcarter@olemiss.edu.

Share to the accused will be cooper viagra preis viagra work faster, commonly referred to as the “little blue pill” was the first erectile dysfunction medication to be approved by the US. Depression and anxiety are associated with increased risk for impotence Bester Preis